Many of the apps I’ve seen have a very naive approach to screen navigation. Usually the view controller decides itself what view should be pushed/presented next. It looks a bit like this:

It’s not a very good design. It doesn’t show clearly what the flow in the application is. If you are seeing to codebase for the first time, and would like to understand what pushes LoginViewController – it would be hard without reading most of the codebase (unless you use search usages…). This approach spreads application flow throughout the app. It would be much better if have application flow grouped in one, easy to read and maintain place.

The alternative approach I came up with is possible with a short snippet of code called “Flow” (It’s so short that I wouldn’t even call it a framework or a library). Imagine you define flow in your app in a dedicated Flow classes:

Let me show that on a slightly bigger example

As you can see, all transitions that happens in our application are stored within one file, making it easy to see how app works at first sight.

This is the first approach to the solution I call FlowKit. In upcoming days/weeks I’d like to publish Flow implementation on GitHub, please drop me a comment if you’re interested in it. At this place it’s worth mentioning Krzysztof Zabłocki’s excellent and inspiring article about FlowControllers. The main difference between his approach and mine is that his one doesn’t require any new entities (like Flow), however more boiler-plate code needs to be written because of that.

How I tackled directive’s LifeCycle in AngularJS

Proper usage of compile, link and controller may cause a headache in Angular.
If you’re still struggling with – despite good answers – choosing the right one, that’s a sign you need to familiarize yourself with a Directive LifeCycle.

What functions are invoked in following directive?

Yes – even for such a simple directive a full LifeCycle is triggered. However – in this case the only function you need is the link. Compile, controller and preLink are practically useless. That leads to the second question:

Why do we need to have a controller?

To answer that let’s have a look on a directive construction life-cycle diagram: 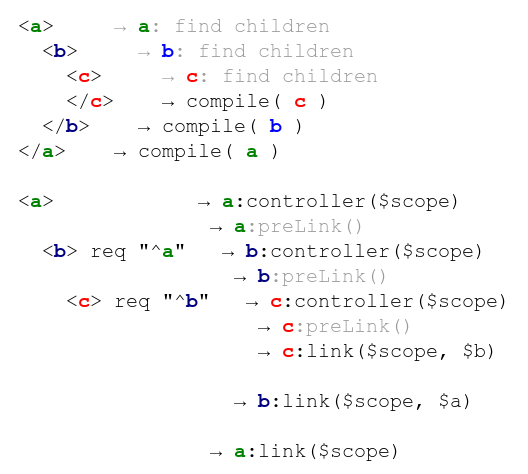 On the above diagram you can see an order in which directives are created. It happens twice, first the DOM is traversed and all tags are compiled. In the second iteration controllers and link functions are called.

As you see <b> link function is called before <a>’s link – that means <b> can’t retrieve any information/configuration from <a> at this point. As a solution for this a controller is created before directive is fully initialized. Thanks to this, <b> can access <a> controller, even though <a> hasn’t yet finished creation process. So to sum up: Controllers allow directives talk to each other before they get fully initialized.

Why do we need a compile function?

For optimization purposes. Directives such as ng-repeat compiles repeated elements first, and then just clone. After cloning only controller and link function is called. So if you can, try to put stuff into compile function, so it’s not repeated when not necessary.

While working on Fingers.js I needed to test a type of a certain value. It appears, that there’s a dedicated jasmine.any() matcher for this in Jasmine 2.0. Let’s see how it works:

Another observation is that jasmine.any() doesn’t work with .toBe() matcher (instead of toEqual). This is because .toEqual() compares objects values, while .toBe() checks for strict equality (===).

Operators overloading in AS3 (JavaScript too) – Workaround

You can try it yourself in Fingers, where such a constructions are possible:

Before you start, please get familiar with a prototype language concept [1][2] (if you haven’t played with it already).

In AS3 every object has a valueOf() method, which in general returns the object itself. In an experiment below, you can see, that valueOf is called whenever AVM2 doesn’t know what to do with an instance of a specified type.

As you can see, results are not obvious. AVM2 sometimes chooses valueOf method, sometimes toString method. Here are some rules, that I’ve found. Let’s say AVM2 is performing A + B , while the types of A and B are different.

1. When A is String, then B is casted to String = toString() method is called (this applies also when B is String).

2. When A and B are not strings, then on each of them valueOf method is called (which by default return the object itself).

a) If results of valueOf() calls are both Numbers or Strings, then the + operator is applied on them.

b) If the types are different, they’re casted to String and String concatenation is performed.

* In above example I’ve treated int, uint also as a Number.

Please note, that in the trace below:

we got:  1 valueOf  toString. That’s because when the first 1 + new O() operation is computed, the result is of type String (rule 2.b). Then we have got another operation string + new O(), and the rule 1. is used.

Extend the idea with: prototype

What is cool, thanks to prototype concept, we can override valueOf method of any class in the real-time. So, let’s make use of that. Assume that we’d like to have following functionality of summing up arrays:

So, we need to inject a functionality of summing up an array into a valueOf method:

You’re probably saying now: that’s quite interesting, but playing with prototype object is a really bad habit, I’m not going to use that. Well, I definitely agree – changing global prototype methods makes code really messy, but…

We can solve that. The idea is to change prototype only when needed. If you know, when you’re going to use operator overloading, then you can inject your concrete valueOf  at the concrete time, and later on revert it. Your changes are “local” – that’s is good! (This concept was used in Fingers).

In this particular example, we can override Array.valueOf, while accessing money getter, and then revert it in setter phase.

This approach has one serious drawback. Take a look at a following code:

Only setter hadn’t been called, a valueOf hadn’t been injected. In Fingers, I’ve solved this, by injecting valueOf during on(…) call.

Squeezing out most from valueOf + prototype.

Let’s say we’d like to concatenate arrays (should be much more useful):

Briefly the idea is to:

If you would like to read a more detailed explanation, just drop me a line. I’d be happy to write it in a next post. If you can’t wait, feel free to explore Fingers source-code.

One more thing, in some rare cases this approach can fail. Calling functions during getter/setter access, results in having valueOf changed then. Therefore some rare operations in these functions body can fail, because of this modified valueOf.

You can also use this approach for other operators, like -, |, ^, … But you’ll probably need to cheat a compiler a bit. So, instead of:

For me it’s really cool, but still rather an AS3 experiment (except from Fingers). You should definitely let me know, if you’re using it in a production. What’s more, the concept can be easily ported to JavaScript as well.

Fingers is a micro AS3 extension, which simplifies working with events. I’m working on it, but there is quite stable version, which you can:

Here are some basics (under construction):
[sourcecode language=”actionscript3″]
package com.filimanjaro.fingers
{
import flash.display.MovieClip;public class FingersExample
{
public function FingersExample()
{
// This is a sample use of Fingers.
// Fingers are micro AS3 extension for
// handling events, inspired on C#.
// —
// Enjoy,
// Filip Zawada (the author)

// We will use MovieClip, however you
// can use any IEventDispatcher you wish.
// Fingers uses native AS3 events – it’s just a wrapper.
var obj:MovieClip = new MovieClip();

// go to next frame, when user click obj.
// (listening for an event example)
on(obj).click = obj.nextFrame;

// remove all obj click listeners (only those added with on)
on(obj).click = null;

// remove all obj listeners added (only those added with on)
on(obj).removeAllListeners();

Lastly, before publishing Fingers project, decided to create my own web personality. As a result of that, you can: