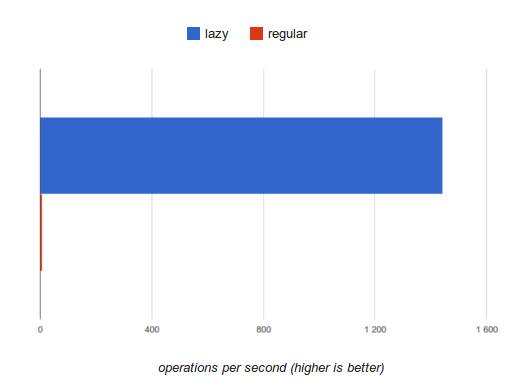 Nice article. I think there’s an error though, .filter(ownedBy(‘me’) is missing an extra closing backet.

Thanks for the great explanation.

contains555 in the example should be contains55, right?

Exactly, I fixed it. Thanks!

Hi, in which version of lodash we can find those awesome improvements?

Not sure what you mean here. But this is a great post, I’d love to see more!

Thanks for kind words. As an explanation, the number of my followers has doubled since I published this post. For me this means there’s a real demand for another post covering this topic. It’s extremely motivating 🙂

Amazing article, I would love to see more on this! Especially how we can design our own code for it

Maybe it’s me but in the whole article I didn’t get an exact answer about lazy evaluation in LoDash.

Is it available in upstream stable LoDash?

Does it need a special configuration to be enabled?

Is it just some experiments you did based on LoDash, but not to be included in LoDash proper?

Right, I’ll include this info in the next article. Currently Lazy Evaluation is available in Lo-Dash v3.0.0-pre with methods map(), filter(), reverse() and few others being lazy. It doesn’t need any special configuration, it just works whenever you do chaining _(src).map().filter().reverse().first().

nice work!
I learnt a lot from this post and I can’t wait to share this with others 🙂

Thanks for awesome article and work!
What about transducers thing, is it going to meet with lo-dash 3.0?

Hi Victor, thanks for kind words. Currently there’s no plan for transducers support.

I’m a little puzzled by this minor detail:

Why can’t you just do:

Sorry for late reply, glad you solved it already. For anyone else wondering, since data is an array this is equivalent of: assets.push(data[0], data[1], ..., data[data.length-1]) (obviously we don’t know length upfront, so we use this trick with apply).

Lols… you can use concat though 😛 but nice I learn this now.

Wouldn’t .concat() do the trick?

Never mind, my coworker figured it out!

No offence, but that should really be your responsibility. lodash is meant to find the most general algorithm, with the best performance. It’s fine as it is. If you need lazy evaluation you can easily layer it on yourself, no need to hack it onto lodash. but if lazy evaluation is added onto lodash, it’ll be impossible to remove it yourself, even if it would improve performance, which it would in some scenarios.

[…] was to create a performant version of underscore (which it was very successful in doing). About a year ago, Lodash started using lazy evaluation to dramatically speed up its support for chained […]

[…] thing that is somewhat popular now adays is Lazy Evaluation.  Lodash implemented a form after a competitor (Lazy.js) where showing big promise for takeover. However, […]

[…] This is actually a pretty weak example for highlighting huge performance gains.  I suspect the most dramatic performance gains will occur when there is no sorting and when the .take() method is used.  In this case, it is not farfetched to achieve a 100X or 1,000X performance improvement.  Filip Zawada is the Lodash contributor who implemented most of the lazy evaluation upgrade.  He does a much better job of explaining the advantages of lazy evaluation. […]

[…] and contains the entire kitchen sink. It is also one of the most performant, with features such as lazy evaluation. You don’t have to include the whole thing if you don’t want to, either: Lodash lets […]